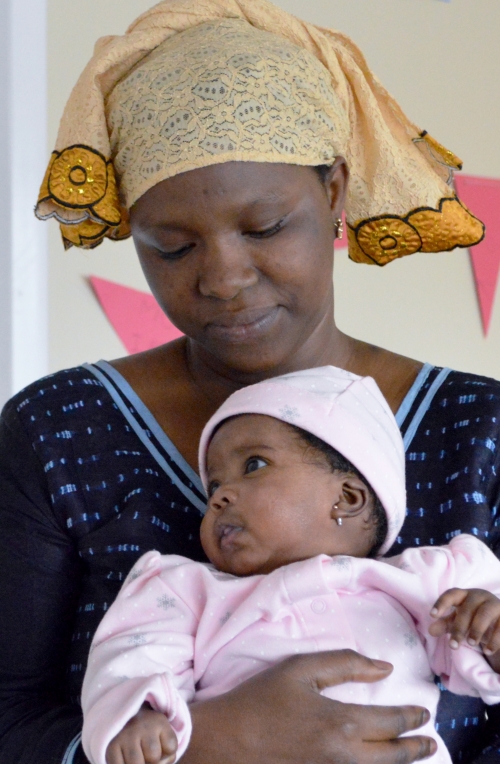 Hassatou is a new immigrant in Utah. She arrived with her three sons in May 2013. She grew up in Guinea on a farm with her parents and four siblings. Hassatou enjoyed helping her parents on the farm alongside her siblings. None of them had been sent to school because the family could not afford tuition fees.

Her husband had left Guinea years before Hassatou. He first stopped in Ghana before ultimately immigrating to Utah and sending for Hassatou and their children. They had been separated for over three years before reuniting in the United States. They were both eager to leave Guinea because they felt they didn’t have freedom and did not like the governing forces in Guinea.

Hassatou’s family stayed behind in their village outside the capital city. When she came to Utah, she was excited by all the opportunity, but quickly became frustrated by the language barrier. “Nobody speaks my language and that makes me sad. It’s hard, because some people speak Swahili or Kirundi or Arabic, but no one speaks my language”. Her first thought was to get a job immediately, but her husband refused and instead requested she go to English class. Hassatou obliged, but after two days returned to her husband determined not to go back. She didn’t understand anything that was being said in class, and was getting frustrated. Her husband comforted her, and told her to keep trying. Hassatou is now highly conversational and loves going to school. “It’s been a good experience. Since I came here, I didn’t even know how to write my name. Now I can read, write and speak English. I had never attended school in my country but now I’m so happy.”

Not only did she learn English, she also formed friendships with fellow classmates. She befriended individuals from different countries such as Congo and Sudan. None of them speak the same native languages so they all communicate in English.

She still misses her family immensely and is excited about possibly visiting them in the future. Hassatou calls them whenever she can afford it and keeps them updated on her family. She plans on visiting weith her daughter once she becomes a US citizen. Hassatou has nothing but positive things to say about her life in Utah. She was amazed how nice everyone is, and loves that she has a support system she can turn to for help.

Hassatou’s husband broke his leg recently and was unable to work for a few months. They had no way of paying rent, and were starting to worry. Hassatou reached out to her case manager at the Asian Association of Utah to explain their situation. He made sure their rent was covered for two months while her husband was healing.

Hassatou also talked about the Sunnyvale Neighborhood Center and how it played a role in her life. She has three young boys that attend the afterschool program at Sunnyvale. There they receive an afterschool snack and homework help. She said they’ve been very successful in Utah and never get into trouble. She’s thankful for the Refugee & Immigrant Center – Asian Association of Utah and the Sunnyvale Neighborhood Center for all their support.

This is a demo store for testing purposes — no orders shall be fulfilled. Dismiss